Bishop Donal McKeown reflects on how the joyful service of Derry native Sr Clare Crockett (1982 -2016) can serve as an inspiration to her generation.

Sr Clare, a native of Derry, was killed in the Ecuador earthquake on 16th April.

This interview, which was recorded on 20th April, featured in Ep 29 of ‘A Question of Faith’ which was first broadcast on CatholicTV in the US on 25th April 2016.

The Servant Sisters of the Home of the Mother, affected by the devastating earthquake in Ecuador, April 16th, 2016.

Due to the obvious confusion in the news surrounding the tragic earthquake that hit the coast of Ecuador this past April 16, we would like to offer precise information regarding our communities of Servant Sisters of the Home of the Mother in Ecuador.

The Servant Sisters of the Home of the Mother have three communities in Ecuador: one in Guayaquil and two in the Province of Manabí (one in Chone and another in Playa Prieta). The latter has suffered the most losses in the earthquake.  Our Sisters ran a school there, “Colegio Sagrada Familia”, which offers a human and religious education to over 400 children from the area. The Sisters’ residence was located on the third floor of one of the school buildings. At the moment of the earthquake – 18:58 (Ecuadorian time) – the four professed Sisters of the community were inside the building. The four Sisters are: Sr. Estela Morales (age 40, from Spain), Sr. Therésè Ryan (age 36, from Ireland), Sr. Merly Alcybar (age 34, from Ecuador), and Sr. Clare Crockett (age 33, from Northern Ireland).

Along with the Sisters, inside the building as well, were seven young postulants, all of them natives of Ecuador: Jazmina, Mayra, Maria Augusta, Valeria, Catalina, Guadalupe, and Mercedes.

In addition to their work in the school, the Sisters also carry out significant humanitarian relief work in the area, especially in response to the state of emergency caused by the intense flooding that devastated the area in the days leading up to the earthquake. The flooding left countless families stranded, without homes. A friend of the community had recently written to us, just days before, commenting his admiration for the Sisters: “The Sisters are smiling as always, but you can tell they’re exhausted from all the work.” There were no students in the school at the time.

The first news that reached us in Spain – at 3:10 AM Spanish time on Sunday, April 17, 2016, just an hour after the earthquake – was that all the Sisters and postulants in Playa Prieta were under the rubble. All of our communities – in Spain, Italy, and the United States – were immediately informed. From that moment, all of the Sisters began praying an unending Rosary in front of the Blessed Sacrament, hour after hour.

Shortly afterwards, news arrived that Sr. Therésè had been rescued, with a fractured ankle and several bruises. The improvised rescue team composed of local neighbors, heard the voice of Sr. Estela, Superior of the community, and was able to reach her. They found she had a broken foot, a black eye, and was covered with bruises. As soon as she felt the impact of the earthquake, Sr. Estela went running into the chapel to rescue the Blessed Sacrament. As soon as she had the Lord in her hands, everything around her collapsed and fell down to the ground floor. Her first thought had been to save the Lord before saving her own life, and the Lord rescued her in turn – there is no doubt about it. Both Sisters were immobilized before being taken to a nearby house to await a medical visit.

The volunteers also heard the voices of Sr. Merly, Guadalupe, and Mercedes. It was not easy reaching them. They encouraged one another, praying and singing songs to the Lord, especially when they felt they were being suffocated by the lack of oxygen. Sr. Merly suffered a severe concussion when an entire wall collapsed on her head. Guadalupe and Mercedes suffered minor bruising.

Rescue efforts continued all during the night, however there were only a few men with inadequate instruments. The Sisters of the community in Guayaquil had also been affected by the earthquake, however to a much lesser degree (the only damage suffered was a cracked wall in the residence for university students). These Sisters organized a rescue team with men from our movement “Lay Members of the Home of the Mother”, who generously gave of their time and effort, placing their own lives at risk (the area has suffered countless aftershocks, some of high intensity). This new rescue team made a four-hour car ride in the middle of the night, in order to reach Playa Prieta. What they found was a devastating sight. Other groups of lay men and women also arrived from Guayaquil and Chone, to come to the Sisters assistance in Playa Prieta.

The Sisters who arrived from Guayaquil started off by attending to the wounded Sisters and postulants. The nearest hospital, in Portoviejo (the largest city in the area), had collapsed. Archbishop Voltolini welcomed the wounded Sisters and Postulants in the Diocese buildings, along with other priests and families that had lost everything. Considering the situation in Manabí, the Sisters from the community of Guayaquil decided to transfer the wounded Sisters to Guayaquil, in order to offer them proper medical attention. With the help of the improvised rescue team, they made an “ambulance”, placing mattresses in the back of a pickup truck. This was the transportation used to take Sr. Estela, Sr. Therésè, and Sr. Merly, along with Mercedes and Guadalupe. They were accompanied by two Sisters from the community in Guayaquil and around two o’clock in the afternoon (Ecuadorian time), on Sunday, April 17, they were hospitalized. Just hours later, they were all released from the hospital and taken to our house in Guayaquil.

In the meantime, in Playa Prieta, the other two Sisters from the community in Guayaquil were able to obtain better equipment, as well as assistance from the Ecuadorian Armed Forces. The hours passed and worries increased as no voices of Sisters were heard from underneath the rubble. There was particular concern when a fairly intense aftershock toppled what was left standing of the building.

Sr. Clare and five postulants were still under the rubble. The postulants’ families were able to arrive on the scene. At 7:50 (Spanish time), the first feared news arrived. The lifeless body of Jazmina had been uncovered. At the time, our community in Spain was praying Vespers. Upon receiving the news, many Sisters could not keep back the tears. When they were able to return to their prayers, it was God’s Word that shed light on this moment of suffering. We had not planned on praying that Psalm, but the Lord in His infinite tender love had prepared it for us. It was Psalm 112, from the Second Vespers for Good Shepherd Sunday: “He has no fear of evil news; with a firm heart he trusts in the Lord. With a steadfast heart he will not fear.” Hours later, around 1 AM on Monday, April 18, the rescue team was able to locate the lifeless bodies of Sr. Clare, Mayra, Maria Augusta, Valeria, and Catalina. 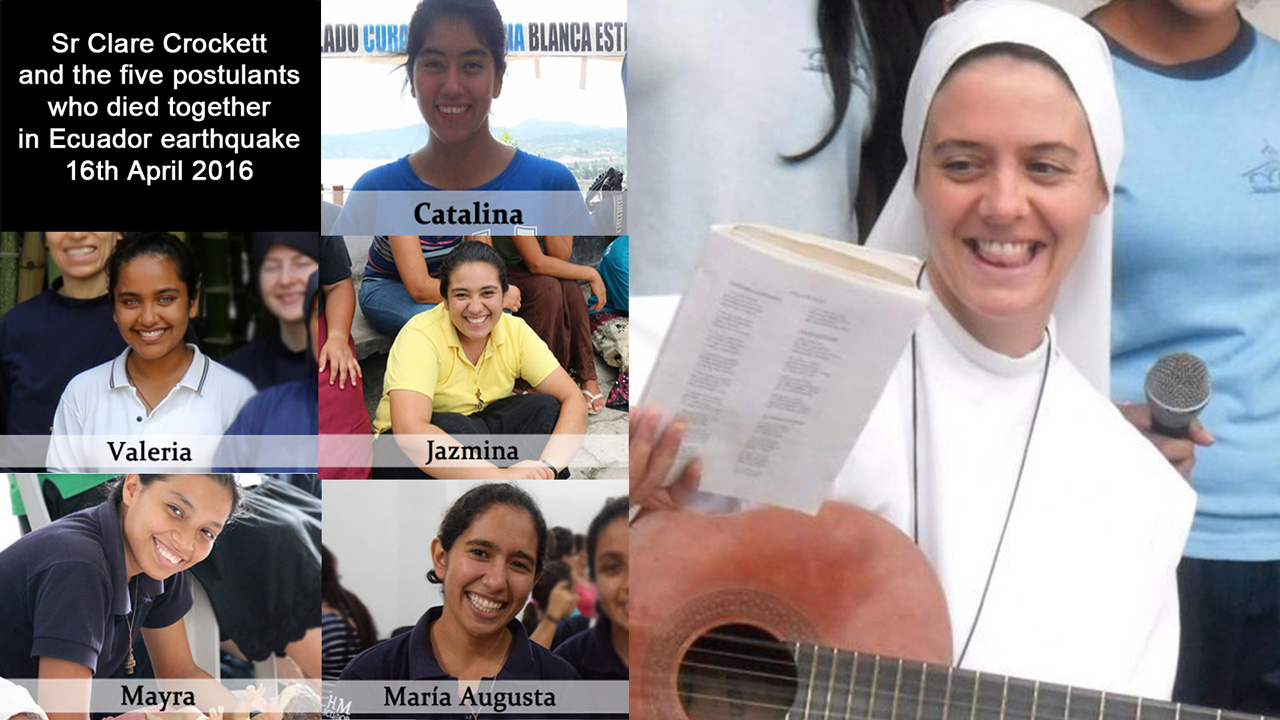 As Sisters who sincerely love each other in the Lord, we mourn the loss of our Sisters. However, our faith assures us that “death is not the end of the path.” Sister Clare had spent nearly 15 years of her life in consecration to the Lord. She was a generous Sister with a special gift for reaching out to children and young people. The postulants had entered the Order just a year ago and were generously preparing themselves to become Servant Sisters. And the Lord found them all prepared. As soon as we received the first telephone call, we asked Our Blessed Mother to protect them all under her mantle.  We are certain that she has done so. And now our gaze is fixed on Heaven, where we hope that the merciful Lord has received them.

We would like to take advantage of this opportunity to thank all of those who have reached out to us in this difficult moment, especially those who have helped us from Ecuador. We also thank all of those who have showed us their support from all over the world. We ask for prayers for our Sisters and their families. We do not want to enclose our hearts in our own suffering, but to embrace the pain of the entire Ecuadorian people. We ask the Lord to help them not to be scandalized by their affliction; we ask Him not to allow them to depart from His side. May these moments inspire them to abandon themselves into His hands more than ever, trusting in His love for them.

Pray for us, that we may be who the Lord wants us to be, and fully live out our vocations as “Spouses of the Crucified Lord.”
United to the Cross in this Easter Season,
May the Lord and Our Mother in Heaven bless all of you.