50th anniversary of the opening of Vatican II

When Pope John XXIII convened the Second Vatican Council on 11 October 1962, few people could have foreseen the impact that it would have on the life of the Church. Many believed that the Council would simply ratify familiar positions, and that its business would be concluded in a matter of months. Yet, the Council lasted until December 1965, and through the many documents it promulgated it breathed new life into the Church. The Council also represented an attempt by the Church to face the modern world in a more positive and open spirit.

Fifty years later, we are still grappling with the challenge of making the timeless message of the Gospel intelligible and relevant. This book examines many of the implications of the teaching of Vatican II, and considers not just the impact of the Council on the Church at that time but also the continuing importance of its teachings today. Some of its major documents are critiqued (Gaudium et Spes and Lumen Gentium) as well as broader themes relating to the overall vision and spirit of the Council. These essays are both informative and reflective, and help to introduce the reader to some of the Council’s most significant achievements.

This book is based on a series of public lectures that took place at Manresa Retreat Centre to mark the 50th anniversary of the opening of Vatican II. 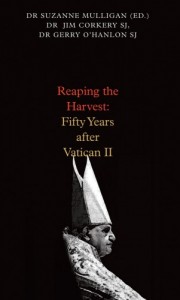